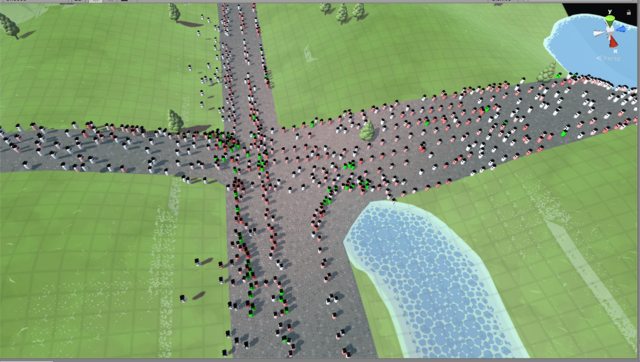 Utilizing flow fields as a means for pathfinding to support hundreds of agents at a time.
Posted in the Serenity Forge project.

After the park has generated the terrain, and determined the paths, the next step is to produce AI agents which traverse that path and walk about the world. Using the same flow field technique used for finding paths, we calculate the flow fields for the individual paths, and create agents which simply reference those flow fields to know which direction to be travelling.

For the most part, flow fields offer a lot of utility for little overhead, and added a really neat enhancement to the game world. Below, I will discuss how we use flow fields in tandem with the world paths, and dip a little into adding a bit of ‘intelligence’ to crowds.

Flow fields at a glance

Flow fields (or “vector fields”) can be imagined as an array of arrows pointing towards a destination. When an AI agent is placed somewhere on that flow field, they simply follow the arrows until they reach their destination. Here is an example: 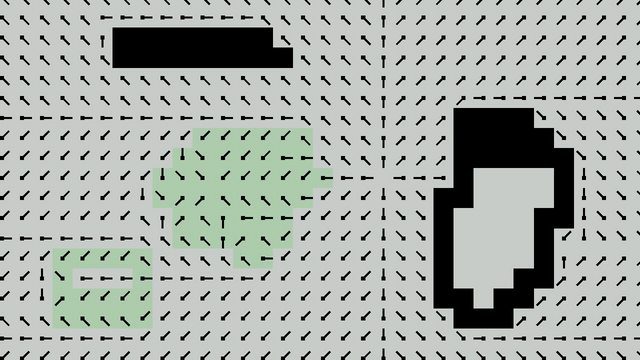 This approach allows us to quickly calculate a handful of fields, and then simply reference them from the AI agents. Individual AI agents do not need to worry about finding a path; if they are on the flow field, they have a direction to travel. This approach starts to slow down when adding rigidbodies or any sort of ‘group’ interaction, discussed further below.

After getting the path layouts for the world, another set of flow fields are generated, only allowing traversal on the path. The idea is to ensure that all travel plans are on the path, however this approach has some issues: 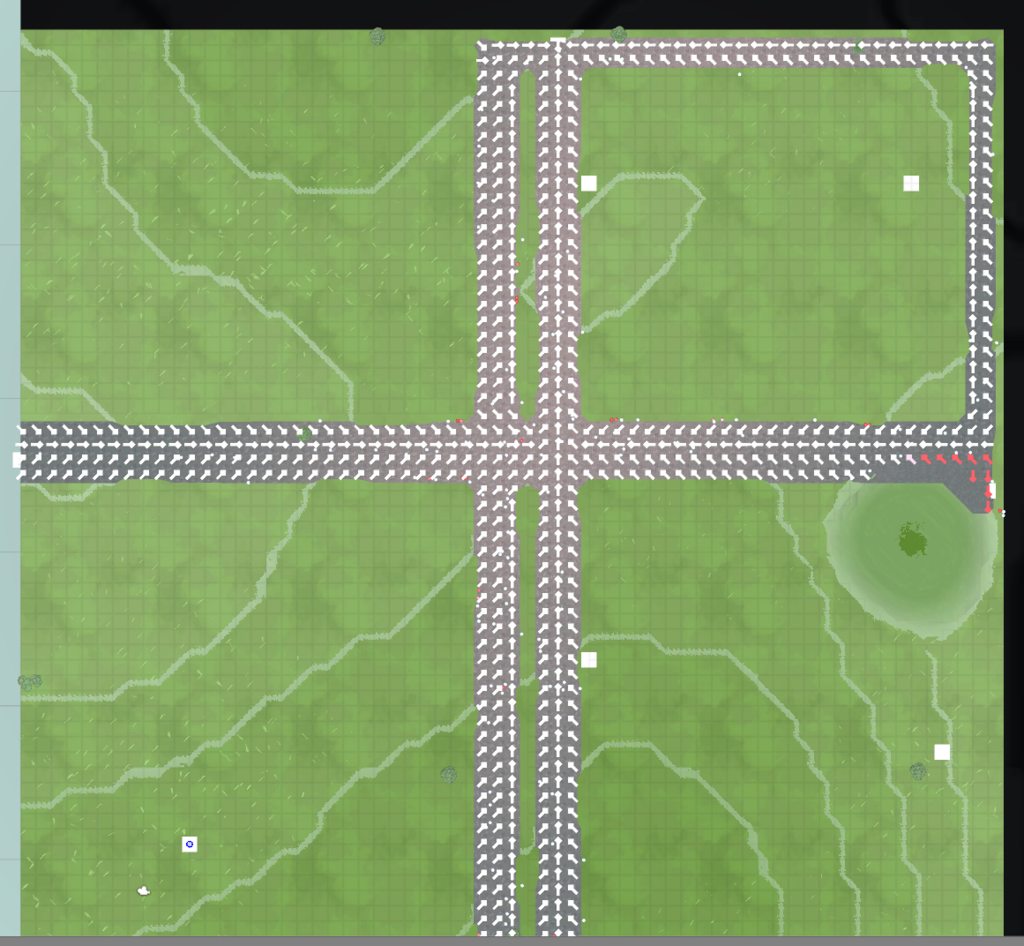 One issue shown here is where the field sometimes directs guests towards the edge of the walkway. This makes logical sense, as the flow fields find the shortest path for agents to traverse, and technically one side of the path can be closer than the other. However, this produces undesirable results: it looks unrealistic, agents can actually fall off of the path, and when combined with some of the grouping/slowing AI causes issues like conga lines and traffic jams. One explored solution was to simply change the cost of the flow fields such that edges of paths are to be avoided when possible, though ultimately was not a perfect solve.

At this point, there is enough data processed for AI agents to start traversing the world. The remaining goal is to make the crowds look somewhat realistic.

The “grouping and stopping” behavior is the key to both the current system’s flaws and its potential to be really, really neat. By applying Rigidbody components to each agent, crowds begin to form and mildly-realistic grouping starts to take place. Another key feature explored was having agents detect obstacles in front of them, and slowing down their movement accordingly. This, combined with the Rigidbody components, creates somewhat realistic grouping and ‘following’ behavior, and looks like a real-life crowd!

In the below example, AI agents turn red as their speed is reduced (due to someone slowing down in front of them). The blue lines indicate the distance each agent checks ahead of them to determine if they should increase/decrease their speed. The green agents are explained further below.

Using this raycast approach works fairly well, however performance drops when adding 100+ AI agents at a time, which is not great. Adding further capabilities to the agents would only eat further into cycles used, so it was a bit desirable to squeeze as much performance out of the agents as possible.

One easy patch was to simply throttle the raycasts. Limiting the raycasts to every 0.1s - 0.3s produced acceptable framerates and decent AI interactions. However, there was the remaining issue of some agents colliding into one another before actually stopping, which comes across as unrealistic, and requires further work.

The ‘stop if something is ahead’ behavior works for a majority of cases. However, as time goes on, an increasing number of stalemates occur between two or more agents that happen to be facing each other. Essentially, the agents acknowledge something is ahead of them and stops accordingly, but neither agent then knows how to resolve the stalemate. 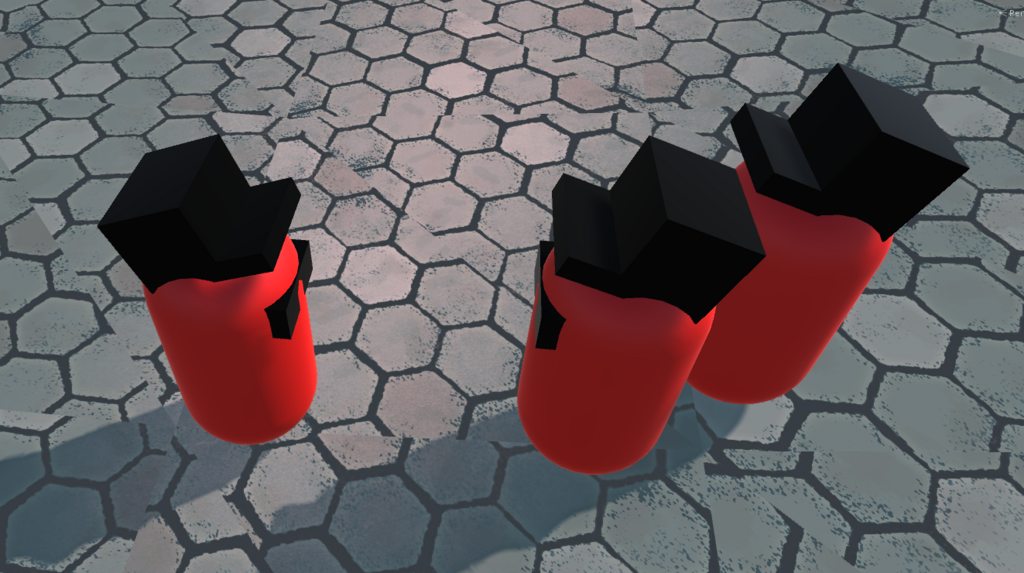 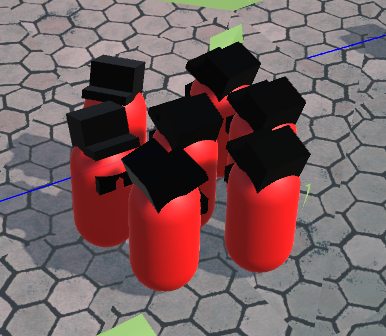 Patiently Waiting and Passing Others

One way to combat the issue of stalemates was to set up a “patience” system for agents, whereby they wait a moment for things to speed up before attempting to force their way forward. Essentially, the code sets a timer on agents that are below a certain speed threshold, and if that timer expires while the agent is still moving slowly, it will attempt to speed forward.

The below example shows a test of many agents travelling the world with the ‘patiently waiting’ mechanic implemented. Agents who turn green have their timers activated - notice some of them continue at the normal speed, while others attempt to push past their obstacles, with mixed success.

Creating AI behavior for ‘realistic’ interactions in a large group is a bit of a different challenge from handling a small number of agents. The issues of stalemates and gridlocks are amplified when increasing the number of agents, especially in intersections, and unrealistic interactions become quite apparent (as they appear more frequently, and are a bit more obvious to the player).

As you can see in the above example, once the player ‘inspects’ an actual intersection, it is quite apparent that the crowd is not functioning realistically. Most agents just try to push past each other, and while that technically gets them past the stalemate scenario, it does not look good. One idea worth exploring is grouping agents together in ‘clusters’ and then having specific AI controllers to essentially direct traffic within those clusters.