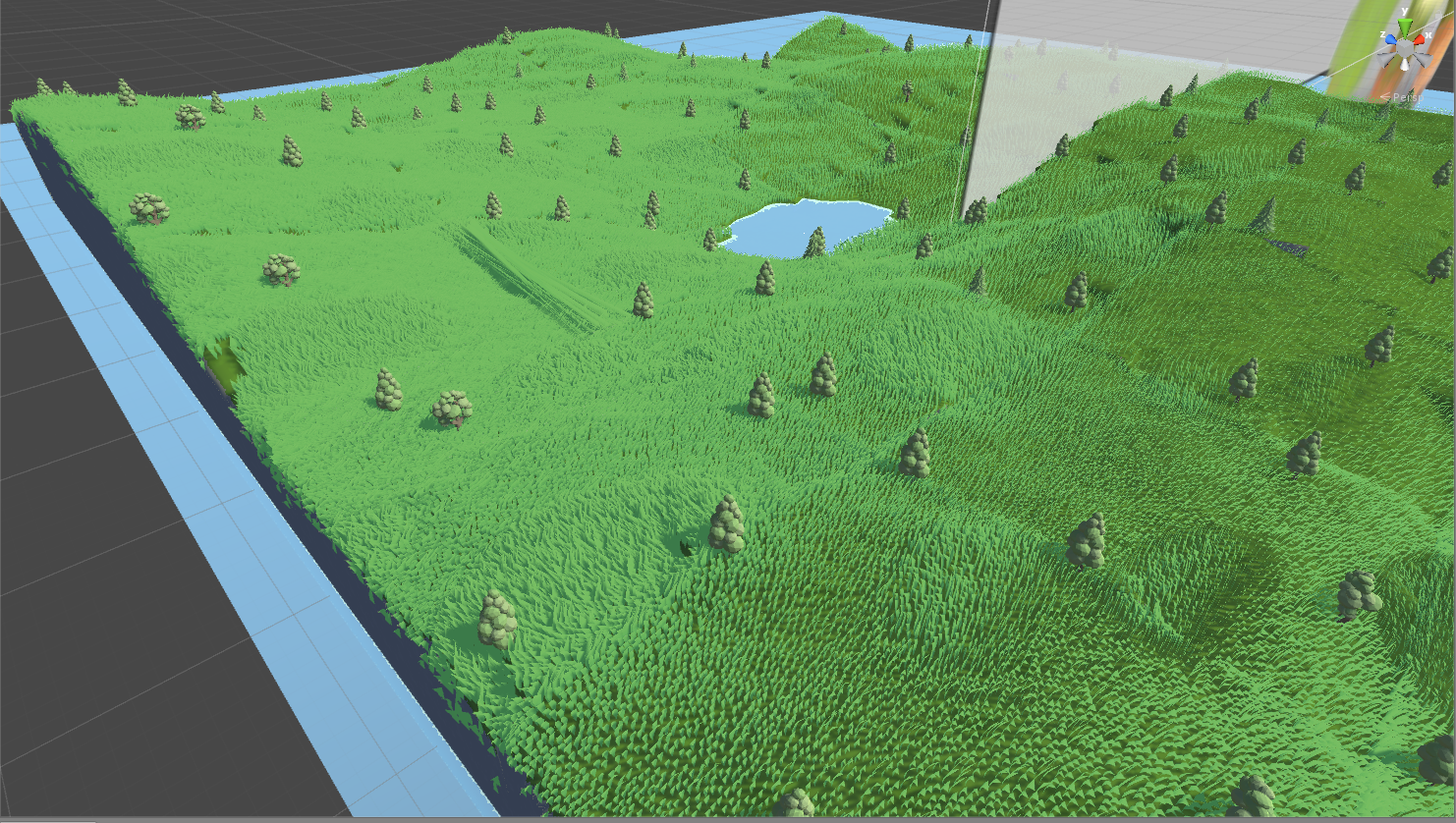 Using the Poisson-Disc algorithm to place grass and trees into a virtual world.
Posted in the Serenity Forge project.

One desired landscape feature was to have general foliage such as blades of grass and trees. The FoliageManager is responsible for determining placement of trees/blades of grass on various sections of terrain. By ‘default,’ grass and trees are spawned sporadically throughout the world, though invalid plots also plant thick forests of trees (discussed below). A majority of the foliage placement derives from the Poisson-Disc algorithm. 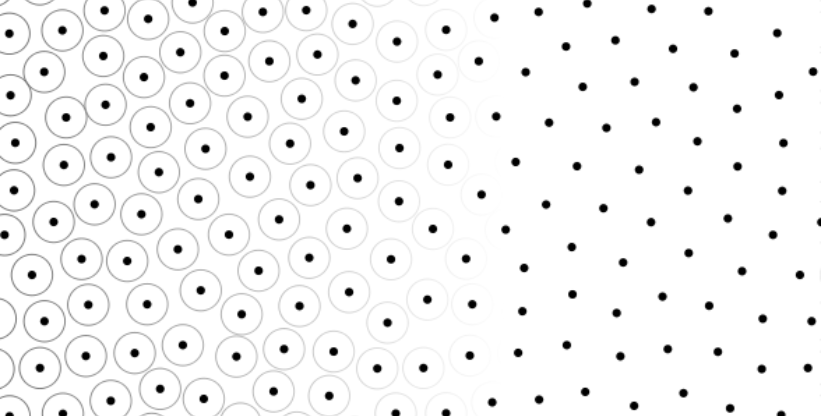 The FoliageManager uses a Poisson-Disc algorithm to generate a list of points inside a given rect which are mostly uniform, and then places foliage prefabs into the world based on those calculated positions.

On game load, a set of several poisson-disc results are calculated, and when planting trees or grass the algorithm simple references those stored results. The Poisson values can be reused across chunks/sections, as they merely provide a 2D distribution and do not interact with terrain height or anything of that nature. By caching a handful of different sets of results, we eliminate the chance that a user will recognize the same pattern being repeated for placed grass/trees.

There are a few tree types, and they are distributed across the world in such a way that similar trees are mostly grouped together, but also slightly mix together. The below image shows three types of trees and how those types are clumped together, but still mix with other types. This is achieved through sampling a Perlin noise value and checking if it falls within certain arbitrary ranges. 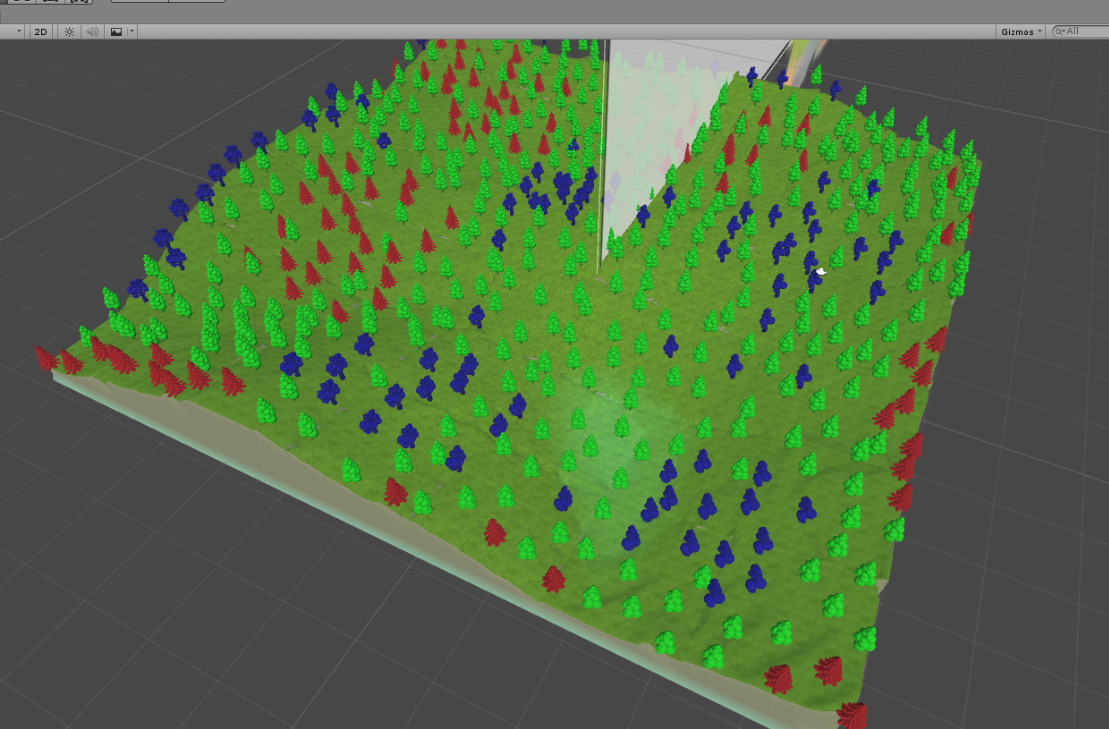 After getting the Poisson arrangement determined, some prefabs are spawned in world space and then placed on the world (assuming the given point of land not too steep, and not under water or on a mountain).

Grass placement operates similar to tree placement, though requires a bit of mesh combining in order to achieve stable frame rates. Each chunk’s grass blades are combined into a single mesh after being placed, which allows us to display many thousand blades of grass without a noticeable drop in FPS.

Perlin noise drives a majority of the ‘real-world’ grass placement, as well as general scaling of grass (blades near the edge of a patch of grass will be shorter than in the center). For the most part, each section maybe has about ~10k blades of grass at any given time, so filtering via noise values has been great for performance.

In some instances (such as invalid plots), the Foliage Manager may be called upon to Poisson-Disc an area of land before planting some trees. This is a matter of handing over a Polygon to the Foliage Manager, at which point it handles the rest. Below is an example of ‘manually’ planted trees in plots that were too small for building: 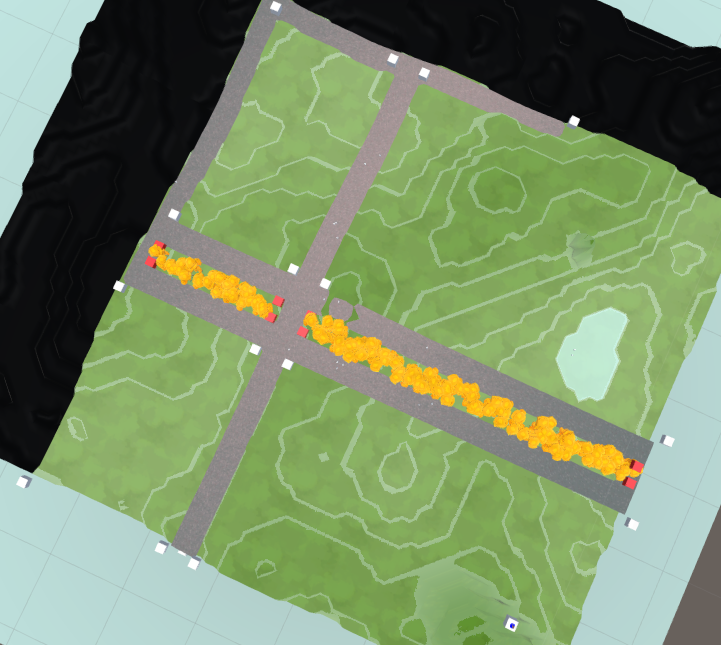